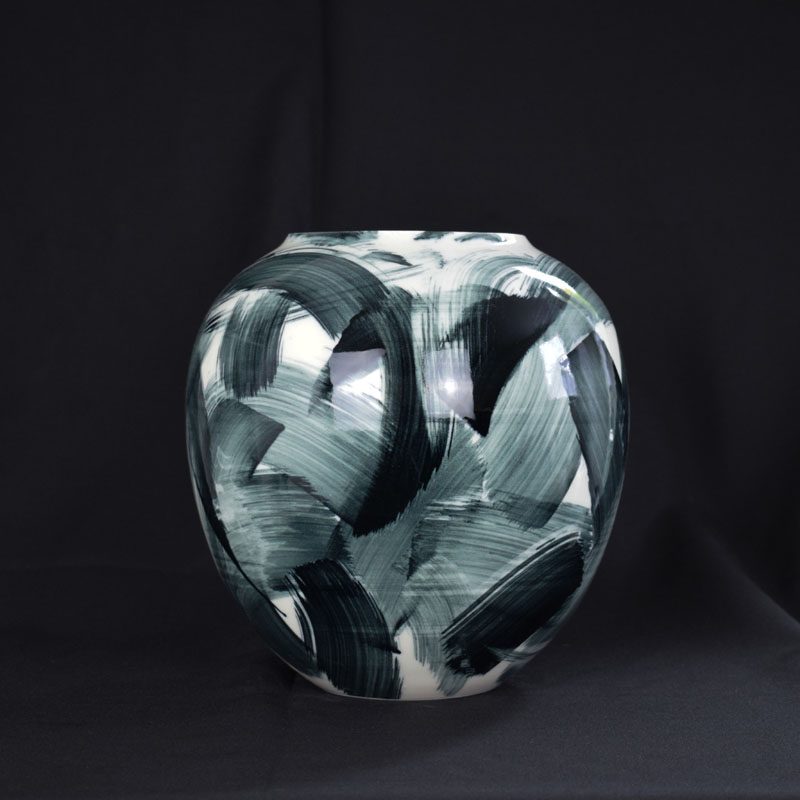 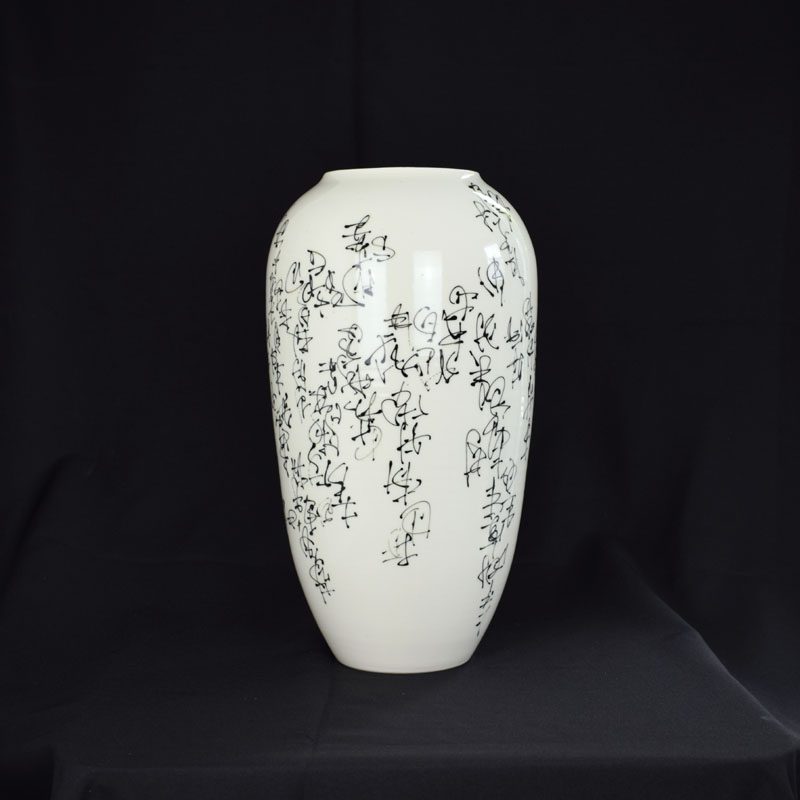 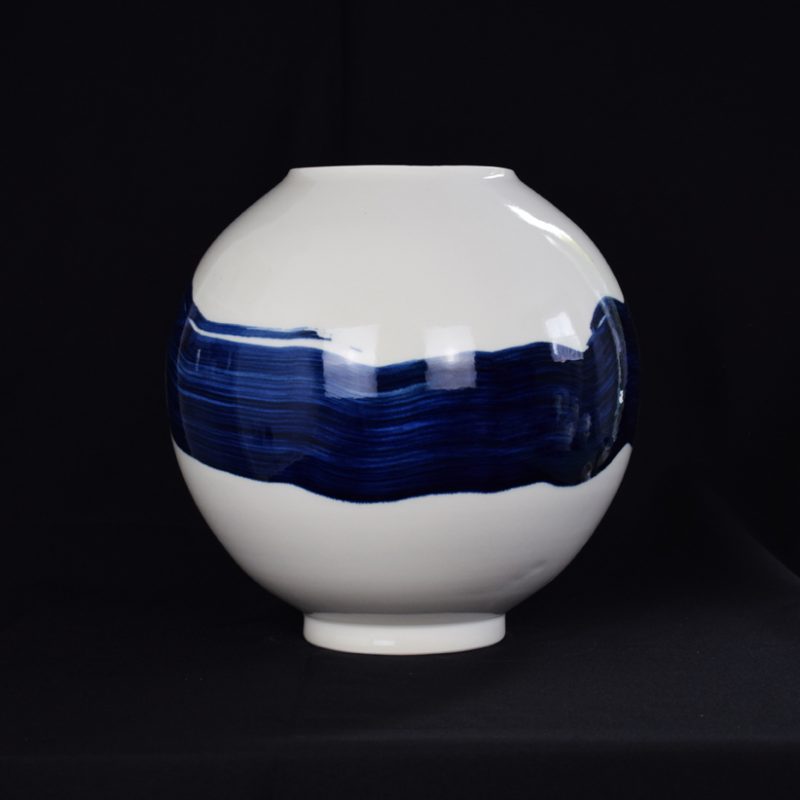 5. Found to Be Living, Glazed Porcelain with Edged Brush and Underglaze H25 cm £450 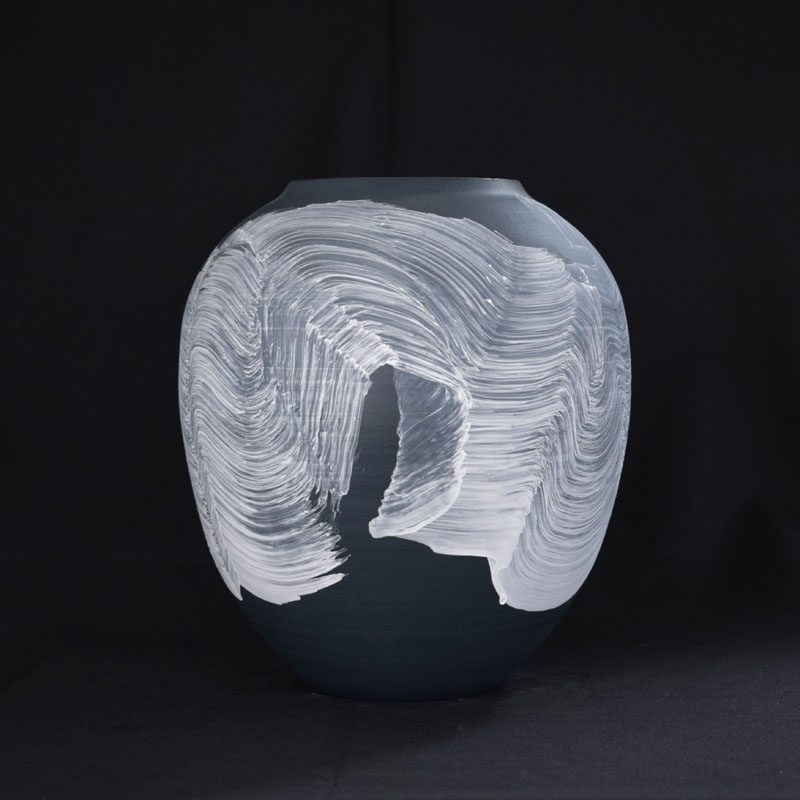 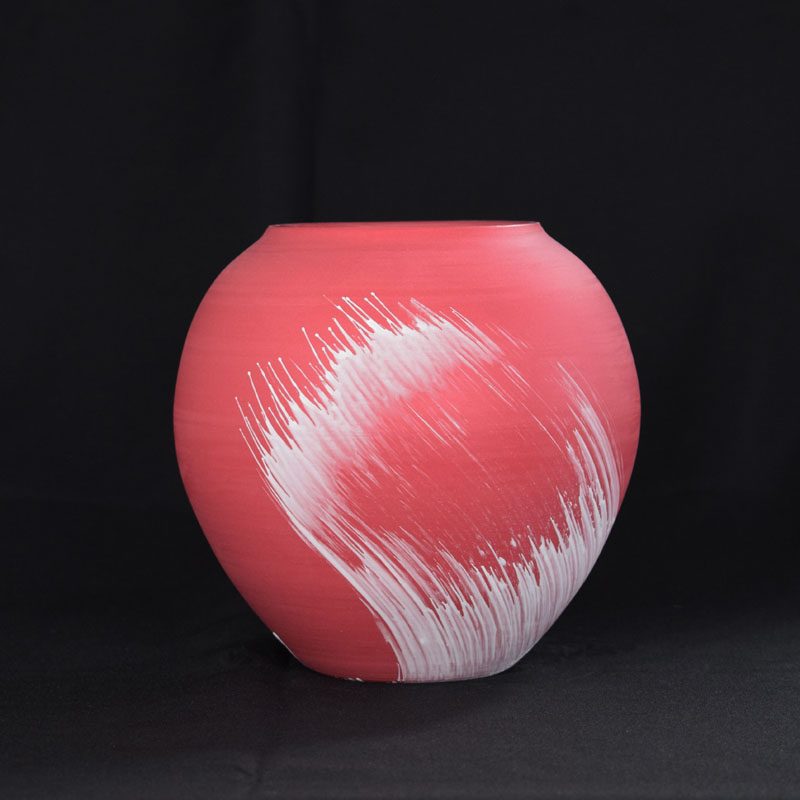 14. Shot in the Dark, Red Porcelain Glazed Inside with Edged Brush and Underglaze H 15 cm. £240 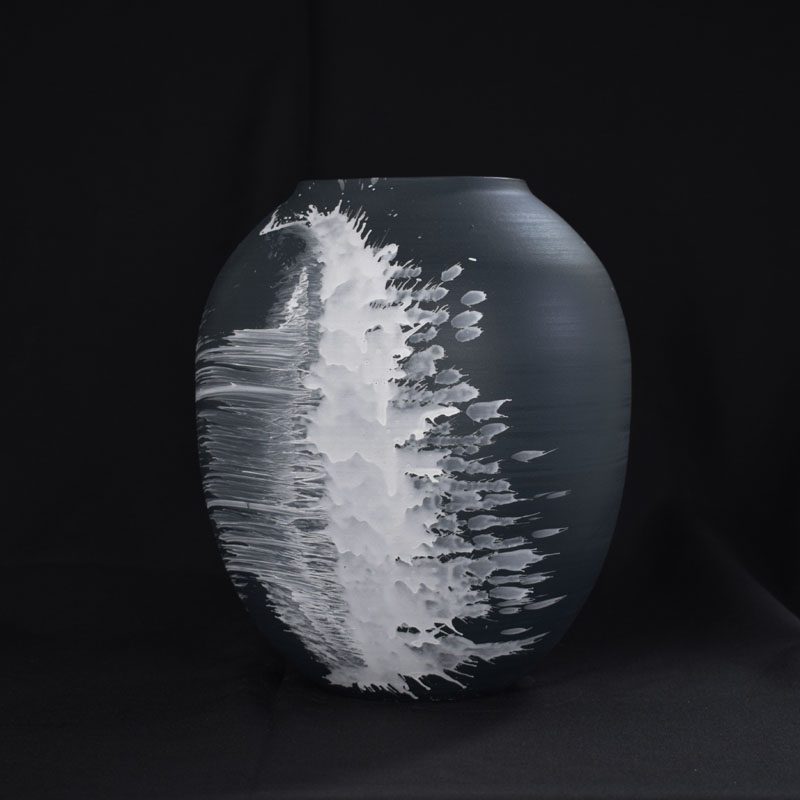 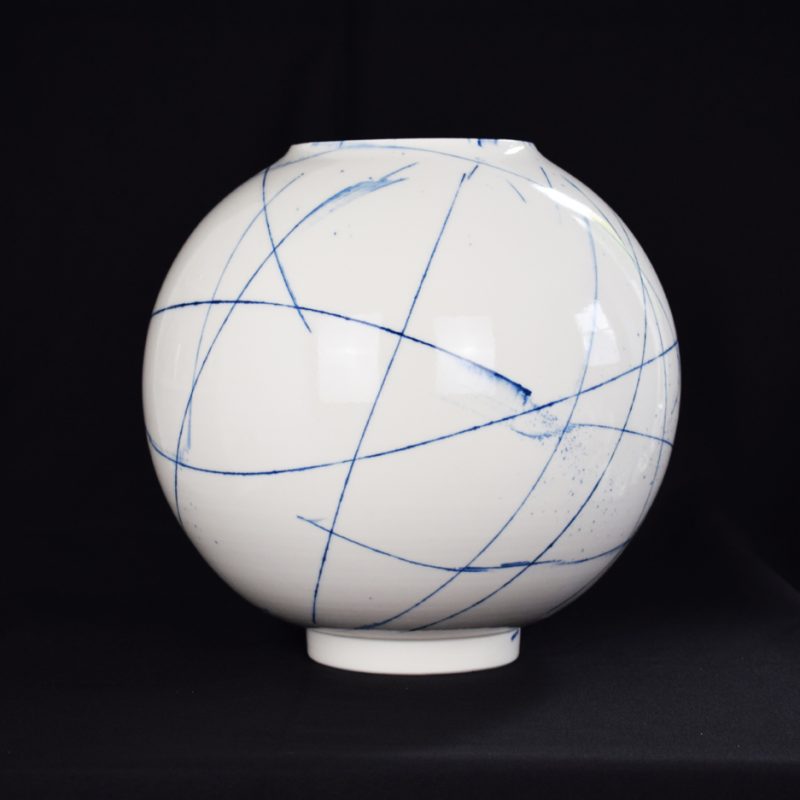 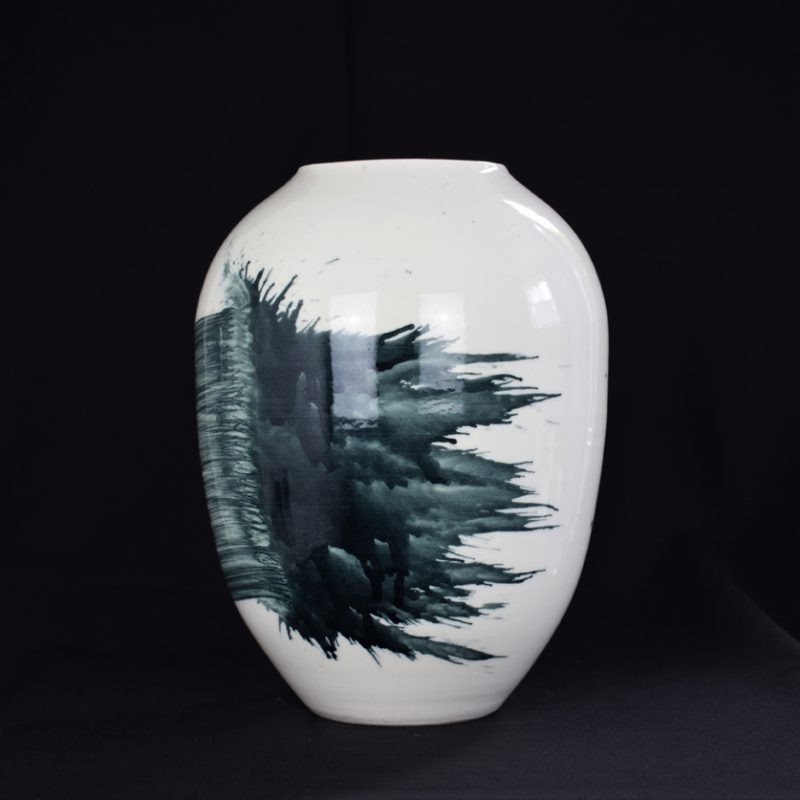 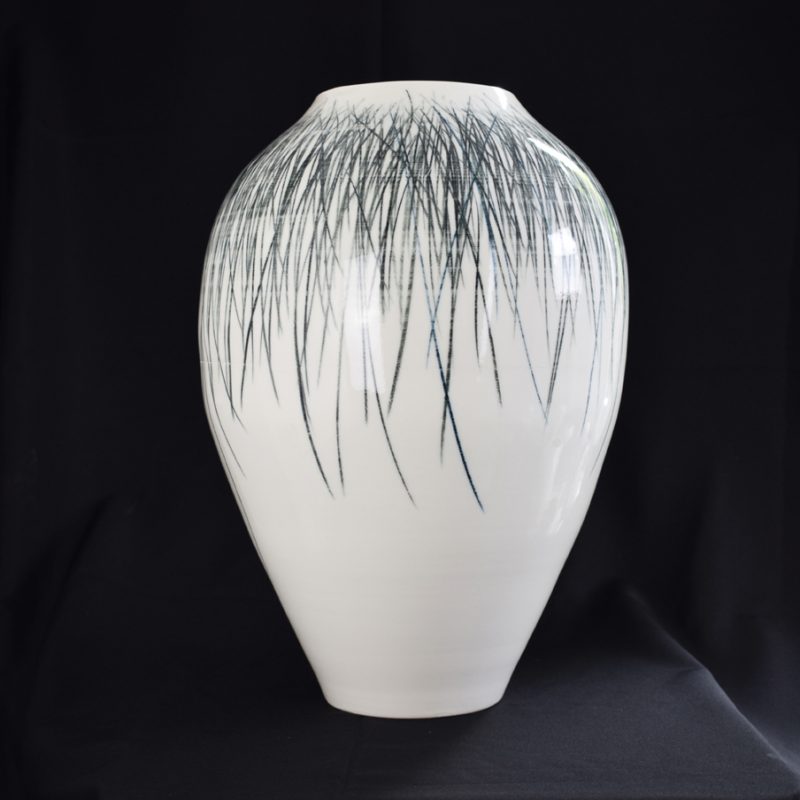 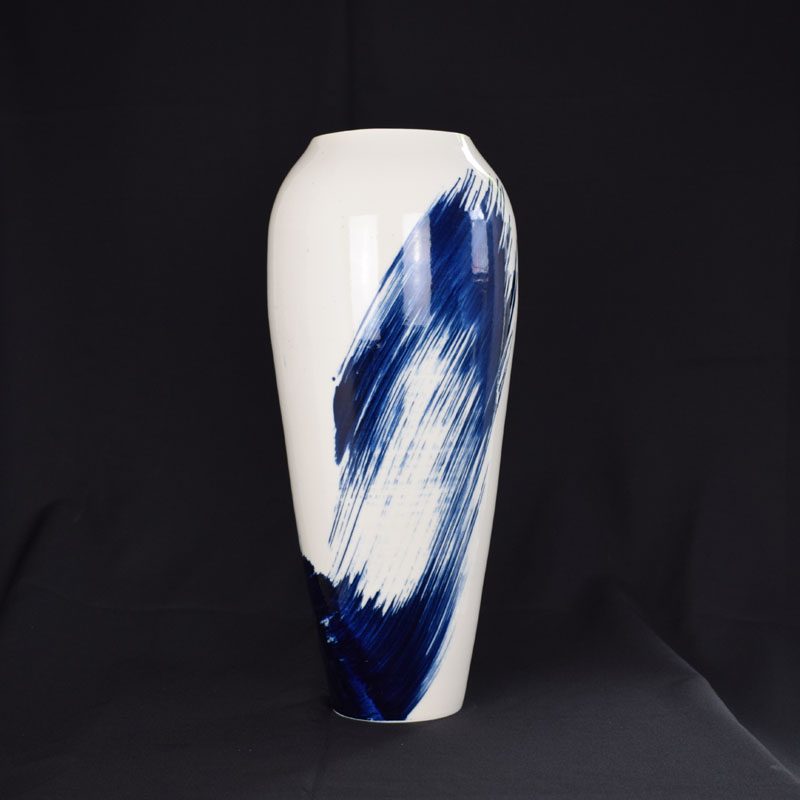 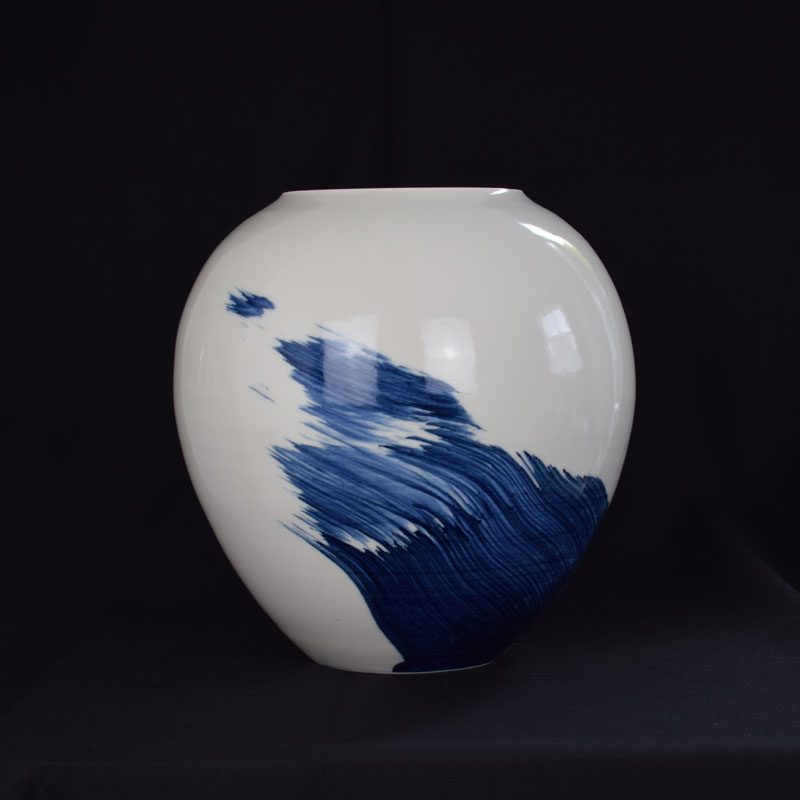 8. Inside Out, Glazed Porcelain with Edged Brush and Underglaze H27 cm. Sold. 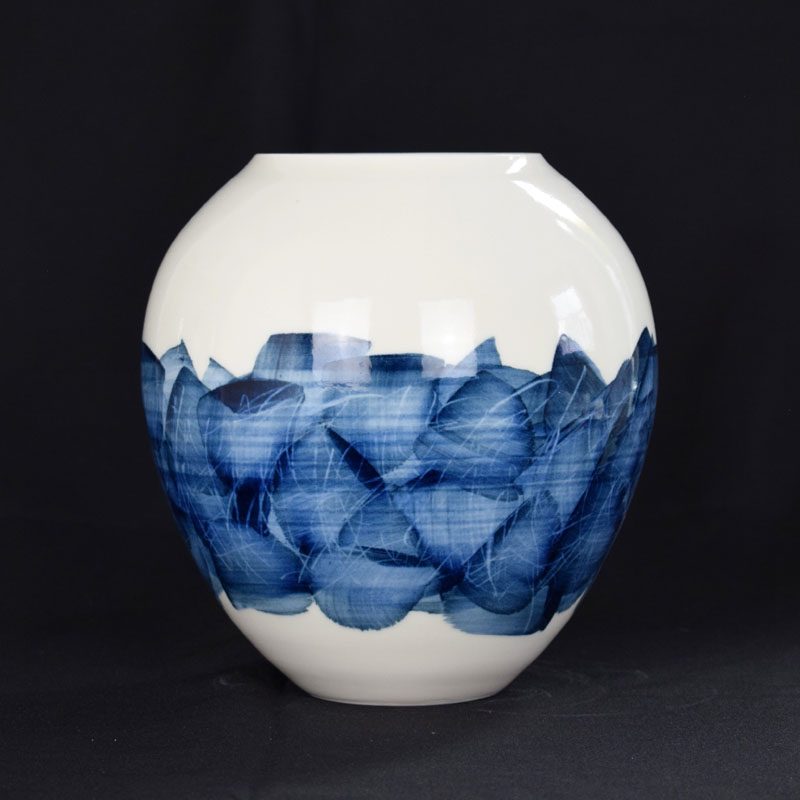 Tom Kemp is a ceramicist who creates thrown porcelain vessels decorated with swift and decisive brushstrokes. Tom has been interested calligraphy and styles of writing, as have been used for thousands of years across the Middle East and Europe, publishing a book about this way of writing in 1999. Since beginning to create pottery in 2012, Tom has used this interest to influence the ‘writing’ on his vessels. He uses a mix of underglazes and stains brushed on to the bisque stage of the firing process, usually in a single-stroke, moving across the curves of the piece.

‘What attracts me and infects me is writing. Not just the mundane scribbling of marks to represent spoken words, but the conscious, deliberate, focused movements of the controlled body which are recorded by the very marks in which writing consists. A single brushstroke may take several seconds but during those seconds I’m concentrating on nothing else: my entire body and its functioning are dedicated to creating the stroke, and, in doing so, all that being was minutely recorded and is there still, captured on the surface of the porcelain, under a thin layer of glass: the few seconds will last, endlessly repeated, as long as the vase, and the vase may not decay until the sun blows up.
After many years of learning formal calligraphic scripts with a large range of writing tools, I had become a lot more interested in the physicality of writing as opposed to its ability to set down the spoken word. I noticed that many scripts from around the world had elements in common and that, taken to the extreme, there were really only a handful of small movements which made up all people’s handwriting. And that makes sense, since our species uses its hand to make that writing. The human hand is composed of several dependent hinges so all of writing comes about as the repetition of a small set of highly efficient curvy motions. Any mathematician will explain the chaos which naturally emerges as the result of linking two or more hinges together. So humans have a natural machine for generating endlessly interesting but tightly defined marks.
But what do these marks signify? On the one hand we can put them to very good use in transcribing our language. But this is just one of the jobs which writing is good for. It is much richer than that subservient purpose and, if I’m right about its general human nature, writing came much earlier to us than our wish to record our speech on flat surfaces. Writing, in a general sense, comes before cultural differences. It points out the fact that our bodies, our natures are fundamental and common, and that speaking this or that language, wearing this or that costume, believing in this or that god, are thin patinas we like to paint ourselves with.
There is a universality to writing in this general sense which appeals greatly to me. The vases are  not painted on, they are written on. Each stroke is not a picture of something; it *is* something: the wonderful attribute of calligraphic tools is that they only work well at speed. There isn’t time to edit and faff about with the forms it produces. Whatever was written in the moment is what gets recorded. That moment of writing is always a little bit terrifying. Having spent time making this pure and classical porcelain form, it stands naked, daring me in just a few moments to make the best possible use of its clear surface. I used to fail at least half the time but now I understand that it’s just a truth-telling: whatever happens is what happens and that’s what gets written.’ – Tom Kemp