Though shadow creeps across the Abbey courtyard, the bath-stone looks glorious kissed by the morning sun. And the azure sky… !! 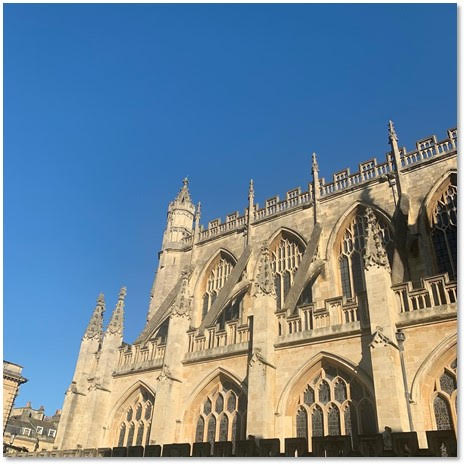 Full many a glorious morning have I seen
Flatter the mountain-tops with sovereign eye,
Kissing with golden face the meadows green,
Gilding pale streams with heavenly alchemy;
Anon permit the basest clouds to ride
With ugly rack on his celestial face
And from the forlorn world his visage hide,
Stealing unseen to west with this disgrace.
Even so my sun one early morn did shine
With all-triumphant splendour on my brow;
But out, alack! he was but one hour mine;
The region cloud hath mask’d him from me now.
Yet him for this my love no whit disdaineth;
Suns of the world may stain when heaven’s sun staineth.

I am hoping we will get similar weather when our three new artists make their way here for the opening of our October show on Saturday the 9th. 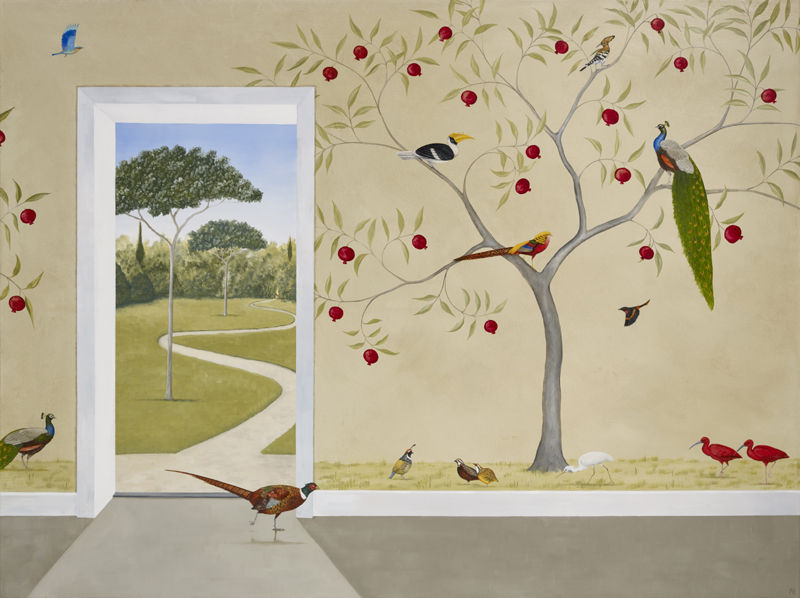 The luscious hues, satisfying geometry and life-enhancing energy in Rebecca Campbell’s oil paintings are to some degree a celebration of the miniature paintings of the Mughal empire, with their reverence for nature, architecture and gardens. Brought up in rural Ireland and Lincolnshire, Rebecca developed a love of horticulture early in life, so it was no surprise that on first visiting India, she was enthralled by the colour, beauty, chaos and diversity of its flora, fauna and festivals. Now based in London, Rebecca’s work as been exhibited as far afield as Mexico City, San Francisco and Houston, Texas. Since 2015 she has been an ambassador for Elephant family, a charity started by the late Mark Shand, dedicated to the protection and preservation of the Asian elephant. 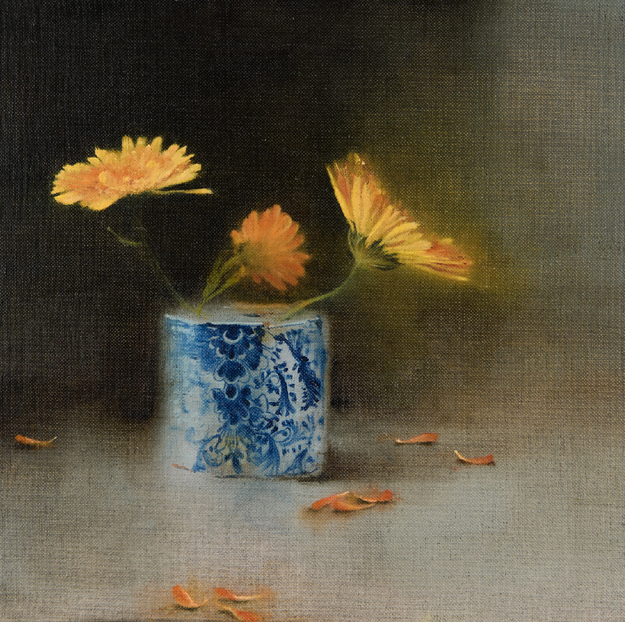 Linda’s delicate oils celebrate the prosaic but transient qualities of objects – seasonal blossom, ceramic vessels, captured in changing light. Linda’s process begins outside, where she observes and works quickly in often extreme weather. This starting point gives her paintings a sense of freshness and spontaneity, combining this with the highly considered and detailed painting she does in the later stages of the process. The organic forms in Linda’s paintings – trees, dandelion heads, flowers, butterflies – are charged with a sense of unpredictability and fleeting movement, and are contrasted with the still solidity of the colourful glazed ceramics.

Last but not least, 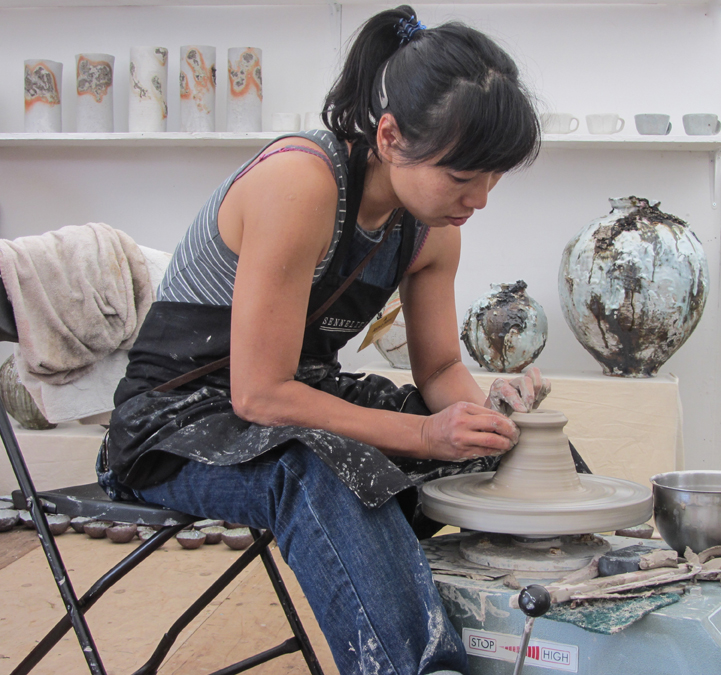 We will be updating the website with Akiko’s work around 2 pm. on Thursday 7 October. The works will then be for sale.
To purchase works by any of the three artists listed, please email or call the gallery.

And finally, I am sure I have quoted this poem before, but I love it, and the misty mornings, well….. 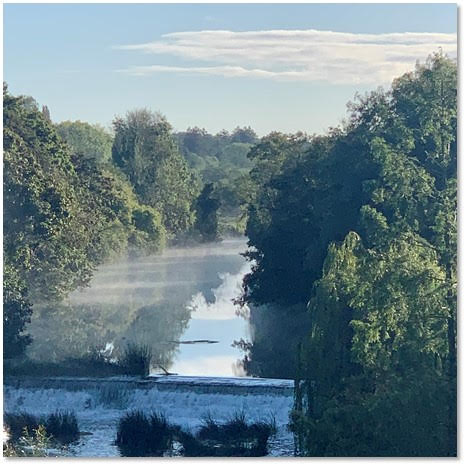 I climbed through woods in the hour-before-dawn dark.
Evil air, a frost-making stillness,

Not a leaf, not a bird-
A world cast in frost. I came out above the wood

Where my breath left tortuous statues in the iron light.
But the valleys were draining the darkness

Till the moorline blackening dregs of the brightening grey
Halved the sky ahead. And I saw the horses:

Huge in the dense grey ten together
Megalith-still. They breathed, making no move,

With draped manes and tilted hind-hooves,
Making no sound.

I passed: not one snorted or jerked its head.
Grey silent fragments
Of a grey still world.

I listened in emptiness on the moor-ridge.
The curlews tear turned its edge on the silence.

Slowly detail leafed from the darkness. Then the sun
Orange, red, red erupted
Silently, and splitting to its core tore and flung cloud,
Shook the gulf open, showed blue,

And the big planets hanging
I turned

Stumbling in a fever of a dream, down towards
The dark woods, from the kindling tops,

And came the horses.
There, still they stood,
But now steaming, and glistening under the flow of light,

Their draped stone manes, their tilted hind-hooves
Stirring under a thaw while all around them

The frost showed its fires. But still they made no sound.
Not one snorted or stamped,

Their hung heads patient as the horizons,
High over valleys, in the red levelling rays

In din of the crowded streets, going among the years, the faces,
May I still meet my memory in so lonely a place

Between the streams and the red clouds, hearing curlews,
Hearing the horizons endure.
-The Horses by Ted Hughes

Thank you for reading,
Aidan Quinn