One ‘person’ we are bidding farewell to this week is the Giant Standing Minotaur.

Here he is prior to a journey that will take him half way round the world to his new home: 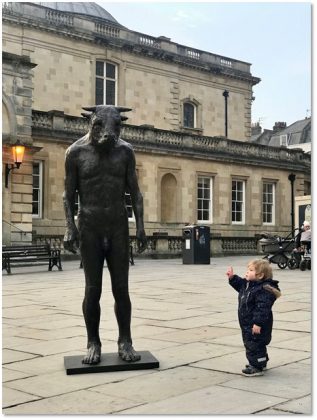 I am so pleased to have captured little Hector either 1) telling him off, 2) marvelling at his size or 2) giving him out in cricket. Either way the minotaur is taking it with stoic resolve (and is not going to review the decision).

We hope to have another edition of the big fellow in the gallery soon.

We have new ceramics by Matt Horne, a young English potter, based in Kent. Matt specialises in porcelain with crystalline glazes, though one thing I have noticed in this body of work is how beautiful the wheel-thrown forms are.

This pot has been reduction-fired in a gas kiln following its normal crystalline glaze firing stage:

The glazes produced in the swirling smoke are copper red, which for all the world looks like gilded copper on an amber base. Matt loves watching the crystals change and grow (via the kiln observation porthole), throughout the 24 hours of glaze firing. Part of the excitement is never knowing exactly what you are going to get. The colours are extraordinary, as are the organic growth patterns.

We will have new work from Nathan Ford for the opening on 12 April.
One outstanding new work is simply entitled ‘Monument’:

Anyone familiar with Nathan’s work will recognise Stan. It is a sad loss that he won’t be here to see another collection of work by Nathan. I am so honoured and glad that we will have this painting for the exhibition.
And, of course, there is the next generation to think of..:

And finally, on remembering, and for Mother’s Day:

‘When I reflect on those rare moments when I stumble without warning into that extraordinary sense of security, that deep peace, I know that consciously and unconsciously she has been with me all my life.
If we could walk together through those summer lanes, with their banks of wild flowers that cast a spell, we probably would not be able to speak, though I would want to tell her all the local news.
We would leave the lanes and I would take her by the beaten path the otter takes under the thick ledges between the lakes. At the lake’s edge I would show her the green lawns speckled with fish bones and blue crayfish shells where the otter feeds and trains her young. The otter whistles down the waters for the male when she wants to mate and chases him back again to his own waters when the work is done; unlike the dear swans that paddle side by side and take turns on their high nest deep within the reeds. Above the lake we would follow the enormous sky until it reaches the low mountains where her life began.
I would want no shadow to fall on her joy and deep trust in god. She would face no false reproaches. As we retraced our steps, I would pick for her the wild orchid and the windflower.’
John McGahern ‘Memoir’