Last Sunday (The day before St. Valentine’s day) was the stormiest of the year (to date !). So it was to one of my favourite panoramic view points in Wiltshire, Cherhill Mounument, that Sancho Panza and I ventured to see what was what.

Here is the dog, looking stoically in the direction of Silbury Hill (it’s out there somewhere) and wondering if the stinging moisture hitting his terrier visage is turbo-charged rain or hailstones (I couldn’t tell..I could barely breathe).

Some of our short film on still-life painter Helen Simmonds was shot at Cherhill (in slightly more favourable conditions).

Needless to say we had the white horse and the ancient hill-fort all to ourselves. On Sunday evening I felt as burnished as a Jaejun Lee moon jar.

The weir at Avoncliff is almost invisible as the Avon is in spate (due to storm Dudley). Eunice is pending.

In honour of St. Valentine and the fleeting February light: 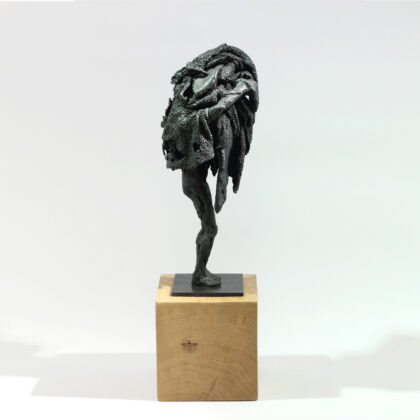 As an unperfect actor on the stage,
Who with his fear is put besides his part,
Or some fierce thing replete with too much rage,
Whose strength’s abundance weakens his own heart;
So I, for fear of trust, forget to say
The perfect ceremony of love’s rite,
And in mine own love’s strength seem to decay,
O’ercharg’d with burden of mine own love’s might.
O, let my books be then the eloquence
And dumb presagers of my speaking breast;
Who plead for love, and look for recompense,
More than that tongue that more hath more express’d.
O, learn to read what silent love hath writ:
To hear with eyes belongs to love’s fine wit.

Our next exhibition at the gallery is apposite given impending landfall of the innocent sounding Eunice. It features an artist who loves the wild weather that sweeps over the moors, tors and river valleys that surround his Devon home. The majority of his work is done in situ, at the mercy of the elements, with only the occasional use of a portable fisherman’s hut for protection. ‘It’s usually pretty fast and dynamic – a way of responding to the often rapidly changing light and conditions of painting outside. Using as much paint as I do the wind and rain may move it around when you throw it on to the paper. It can be harsh out there, up on the moor, but I love it. My studio is just a place for considering finished work and tidying it up. It is fantastic working outside – you’re not totally in control because of the weather and the raw inspiration of the place. ‘

The coast to the south-east of Dartmoor is the inspiration for the seascapes, which embody the same spirit of nature unbridled. 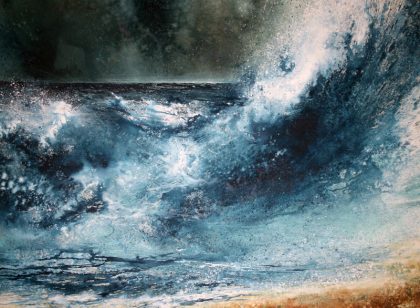 Ceramicist Adam Buick, a qualified geologist, also loves to involve the very earth around him in his work, with pieces of quartz and local clays involved in the making of his moon jars. There was no singing slope but ran
Down through its song to bogs of black
And walls were waterfalls. A man

He crept into his dryness, deep
To his centre’s self. Eyebrows of banks
Were juts of eaves for huddling sheep

And gulls passed like ideas through
The thickened air. And he, the man,
Shrunk to his centre’s dryness, knew

Only direction, till he found
The door, the room, the fire; and then
He filled his limits all around

And saw that that dry centre all
The time was slopes and bogs of black,
And sheep, and wall being waterfall;

And, with them in his bones like laws
Of his own self, he watched them and
Knew then what his direction was.

‘Walking in a Rain Storm’ by Norman McCaig (Thank you Tara)

Thank you for reading,