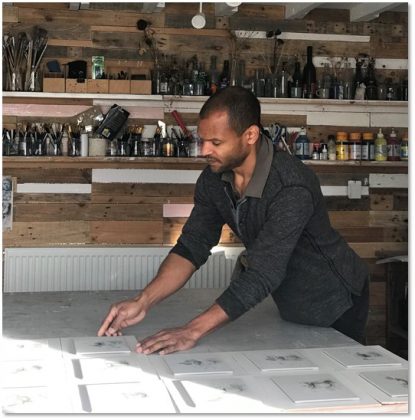 Over two decades ago Nathan Ford first walked through the doors of the gallery, a shy but determined raw young artist. This exhibition marks his tenth solo show. To accompany this auspicious exhibition we have, with the help of renowned cameraman Michael Pitts, made a twelve minute film, Nathan Ford, Painter. Please see Nathan’s page on our website, and accompanying links, for details.

With Nathan, the discomfiture to him of sitting in front of a camera and being interviewed was, I surmised, in direct proportion to the benefit of doing so. It was not quite a Groucho Marx-type paradox (where anyone who wants to be interviewed would not make a worthwhile interviewee). Some people, some artists, cope well with the required concision. Nathan would much prefer to show rather than tell, though I knew there was a good story to be wrought from his recalcitrance.

But where to start, and how to draw it out of a man unwilling to be caught in the cross-hairs of art-waffle for a nanosecond. I was aware that attempting to portray him expounding on the deeper hankerings of his oeuvre would be met with derision. There were consistent warnings, as stern as any of his portraiture eviscerations, that any artistic streams of consciousness were akin to him being unable to face his wife and children again. He arrived at the gallery under the false pretence that most of the day would be spent taking footage of him painting a portrait. A necessary inducement, as I was aware that drawing out a narrative would necessitate interview material, and that the edited result wouldn’t be what he feared. He is much too warm and personable a human being. 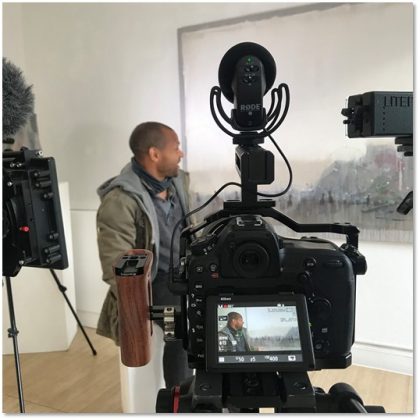 Nathan’s sons are 14 and 12 respectively and are heavily invested in Nathan’s work, as arbiters of good taste as much as makers of stencils, drafters of amorphous cartoon monsters, graffiti-scrawlers on cityscape walls. ‘They’ve got it’ he exclaims at one point, ‘Of course they’ve got it, they’re kids!’ And so Nathan is sceptical about art school, training, validation, and artists ‘fluffing around trying to make work that’s real.’ If nothing else his two boys have been stalwart markers of time throughout his career, his portraits charting their growth, their vulnerability still staring out at us a decade after he first allowed himself to paint them and to allow the public to see the results.

A body of work by Nathan is always recording the passage of time, whether portraits or the dusky European cityscapes of family vacations. Years back it was a tender depiction of Reuben’s ear as a child. In the BP prize exhibition of 2018, ‘Dad’s Last Day’ is a painting (in the moment) of exactly that. There is no equivocation here, no rosy nostalgic hue. His work comes hard and fast. East Place is the location of his dad Stan’s garage in South East London that he grew up in and around as a teenager; Sunny Inside is a another street scene in the West Norwood of his childhood. They have a fin de siècle feeling in them. That is what they are.

So his family are not only subjects in his portraits. Both sons do extensive work on the larger paintings themselves. He waxes lyrical about his children and is unabashedly proud of their achievements and projects, among them Joachim’s inspired and idiosyncratic music (used in the film), and Reuben’s coding (which helps run his website). However, it is evident that as choreographer and chief conductor Nathan is not stinting on the hard yards of work. There is the sheer practical reality that every pane of non-reflective glass, every mitre-joint of every tulip-wood frame is hand-cut, painted and sanded by Nathan himself. When it comes to his work and the presentation of it he is the definition of punctiliousness.

The larger paintings are painted on to birch panels, most of them in 122 x 170 cm. landscape format. Having previously painted on to canvas and linen, the use of birch is the result of extensive research, a gradual honing down of possibilities to find a surface with the ideal tooth to paint comfortably on, and to absorb the layers of primer, washes and oil paint in such a way as to preserve the delicate balance of Nathan’s ‘variations in the key of grey’ palette. ‘I fight the grey’ Nathan opines, ‘I try lots of different things and when I think I have fixed the painting I step back….and it’s grey again.’

The actual physical flatness of the surface, which will be been sanded back repeatedly between primer and base layers, is a contrast to the depth of the vistas within, which often incorporate streetscapes inclining or receding into the hum of evening light, on a Welsh hillside (Flock V) , or in a Sicilian town (La Scena). There is no impasto, no flash, no shiny, luscious oily dollops of paint. With detailed skeletal drawings underpinning the blocked-in matte colour of the overhanging buildings, you can smell south London in the brickwork, the pavements and scaffolding.

The 90 days of lockdown series of paintings more literally chronicle the passage of days, beginning on March 24th 2020 and carrying on for three months, one painting per day. The bunches of weeds; buttercup, clover, cow parsley, daisy, dandelion, wild sweet pea, wild strawberry, are a daily meditation on ‘looking’, their little bursts of colour and form imbued with the noise of quotidian news and events- new restrictions reported, casualty figures updated, events cancelled, protests in the U.S…. These little plants are Leonard Cohen’s heroes in the seaweed from Suzanne,

Nathan would take his place each day, his chair in its ordained position, the tilted canvas backdrop -allowing for the angle of eyes to subject- framing his votive cup of weeds, revivified by water or dead and almost completely dried out. From his station he would draw, drawing out of himself the process of daily observance, extracting the story of lockdown, living lockdown from an artistic and personal solitude, looking at bunches of offerings gathered at random on the one permitted family walk du jour.

These small lockdown paintings are a typical Fordian enterprise. His marking of time, family life woven into the works; the channelling of events and emotions from worlds within and without, show characteristic resolve. Their essence is narrow, in each touchingly precious little piece, and then broad in that they form one larger piece of work encapsulating three months of dedicated intensity. The cup is a canvas within a canvas, now here, now evanescing to make way for a barely visible saw-tooted leaf or dried-out weed stem.

Nathan’s 20 years of exhibitions have all been coming to this. His sharpened skills have turned lockdown into opportunity. ‘It’s an interesting chapter’ he intones gently, ‘but what can I do… but make a painting’. And with a shrug of his shoulders, I knew he was bringing the film to a close.