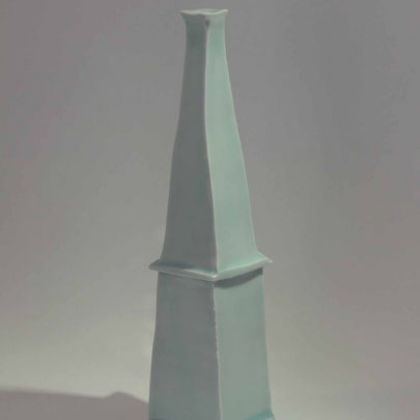 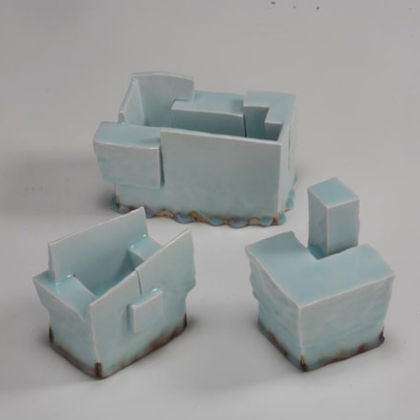 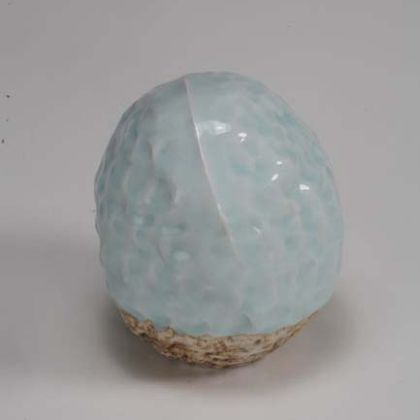 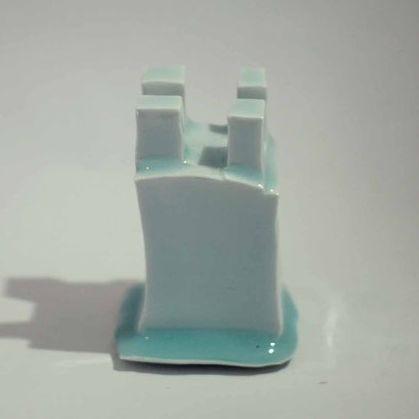 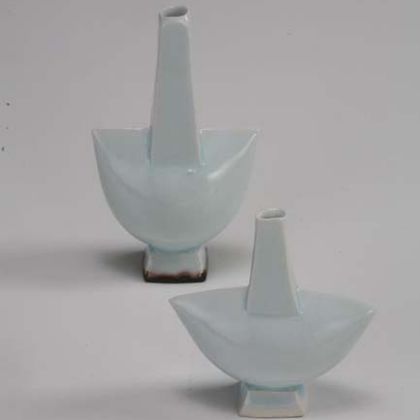 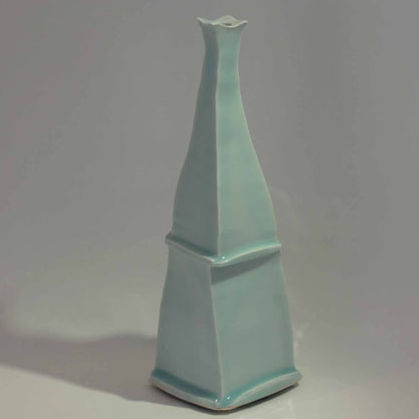 For Masamichi Yosahikawa, one of Japans leading artists, the act of creation in porcelain is an act of a prayer (in spite of the technical and scientific requirements). “Throughout history, in literature, music, and philosophy, humanity has sought new ways to deepen the joy of living. Through my art I strive to portray this eternal welling up of life in clear, transparent forms”.

Inventor of dynamic ice-blue porcelain
In a pottery centre famed for its shudei (red clay) and yakishime (high-fired unglazed stoneware), Masamichi Yoshikawa daringly introduces hakuji (white) and seihakuji (bluish white) porcelain into his works. He explains, “I couldn’t wrestle in the same ring with people making pottery here for generations.” Shortly after coming to that realization, he encountered Northern Sung hakuji and seihakuji, which are considered the pinnacle of Chinese ceramics, and thought to himself, “This is it!” For Yoshikawa, who originally aspired to be an interior designer and was always enamoured of the colour white, hakuji and seihakuji provide him with the sense of designing in white. “Some people find hakuji too cold,” says Yoshikawa, “yet there is a quality to Korean Yi-dynasty hakuji that can move me to tears, and I find seihakuji so expressive.” Yoshikawa’s beautiful forms accentuate the phantom-like blue that dwells within the subtle puddling of the seihakuji glaze. His vessels convey what might best be described as a quiet sense of heat. He has been the recipient of numerous international ceramic art awards in recent years, the most recent being the grand prize at the 2004 Taiwan International Ceramics Biennale. Yoshikawa feels that going abroad has made him more keenly aware of the extent to which the local air, water, humidity, light, and soil have cultivated his sensibilities and actually do form his creative flesh and blood. “A potter,” he says, “is much like a farmer, continually confronting and learning from the elements of nature.”

Masamichi Yoshikawa builds his architectures from solid porcelain blocks. Contrary to usual edifices, these are elevated off the ground by support constructions similar to those used for bridges. However, due to the pillar construction and the compactness of these edifices they remain grounded but appear to stand rooted on solid stilts. The bases are generally raised. The edifice intends to be viewed as a cavity, a square surrounded by walls and yet open. Whether a ruin or a futuristic architecture, the plastics are, in the broadest sense of the term, transformed into vessels and thus create a link to the other side of his work which is oriented towards Japanese utility ceramics. Similar to the architectural pieces, these ceramic pieces are also placed on feet, appear to grow out of the ground and are elevated above the original functional purpose of a vessel by their elegant shapes and surface treatment.
The generous surfaces with their different levels often serve to intensify the colour of the celadon. By applying sgraffito on the extremely hard porcelains and filling in the rills with copper or cobalt the drawing is transformed into a painting through the blending of the oxides. Colored sgrafitto and drawings distinguish all of Yoshikawa’s work, often invisible to the fleeting eye, applied at the bottom of his work as the artist’s signature, as he says, or as his diary.
From the past three generations, Masamichi Yoshikawa has been greatly influeneced by the following: Kenkichi Tomimoto, Soma Ishiguro, Kazuo Yagi, Shindo Tsuji and recently, mostly Hanteishi Kawakita. He works only in porcelain and varies the thickness of the objects and the shape of the stands. Everything is voluntarily asymmetrical and made of assembled slabs. His principle is irregularity, a well-balanced irregularity. The works are heavy and stable; vases, some quite tall, boxes and bowls. Most are striped and the grooves filled with cobalt, or, more rarely, copper which turns red during firing in a reduced atmosphere. The basic tone is always a satiny white slightly tinged with blue. Only a few, plain works are of a “moonlight” sky-blue.