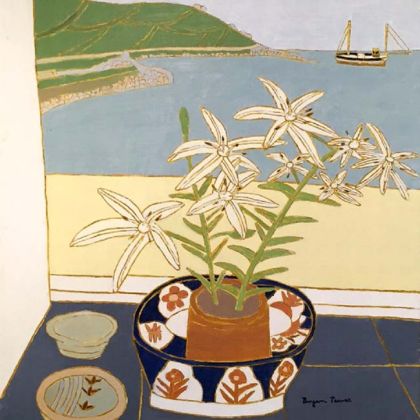 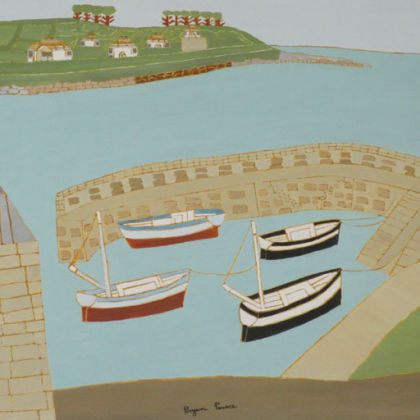 The relationship between Bryan Pearce and Beaux Arts predates the opening in 1980 of the gallery in Bath, as Reg and Patricia Singh first exhibited his work in their Wills Lane Gallery in St. Ives in 1974, with his first solo show there in 1977.  A regular in group displays, there have been three one-man exhibitions of Bryan’s work at Beaux Arts since 1989.  Though St. Ives and the Penwith peninsula have undergone the radical and inexorable development typical of a coastal area so blessed by natural beauty, Bryan’s familiar ochre lines, Smeaton’s pier with the arches, the tiled studio window sill, the unmistakable harbour and church scenes, the trawlers and seagulls; all are part of the artistic bricks and mortar of this charmed and magical place.

Bryan Pearce’s work is in part a testament to those who have nurtured and encouraged him over the years, in particular his mother Mary, who in bringing home a Woolworths colouring book set in motion an incredible 50 years of painting and drawing.  It was Mary who, in the same year, 1953, first took Bryan along to Leonard Fuller’s class at the St. Ives School of Painting, so that he could be ‘kept occupied’.  It was also Mary who, in converting the attic for her own painting, inadvertently provided Bryan with his first studio.

In giving so readily of herself, Mary Pearce allowed Brian to express his singular account of the world, oblivious and uninterested in the work of others, uninfluenced and undisturbed by the ripples of forerunners and contemporaries.  Bryan’s unique brick by brick visions of St. Ives, rendered with such careful attention, owe much to the peace of mind he gained from painting.  His gentle mixing and application of paint is something we would now call ‘therapy’, though Mary had a more succinct way of putting it: ‘Colours do you so much good!’

John Keats described ‘the sweet converse of an innocent mind’ as ‘almost the highest bliss of human-kind’.  The work of Bryan Pearce is the most glittering of silver linings.  It is incredible to think that we could so easily have been deprived of this sweet converse.  A mother’s devotion, the serendipitous discovery of his talent, the subsequent nurturing and appreciation of his ability, the dedication of Janet Axten on behalf of the Bryan Pearce Trustees; all are matters worthy of celebration.