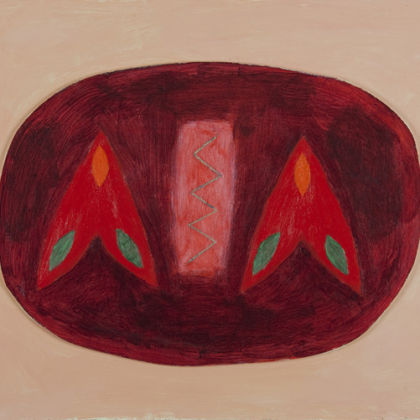 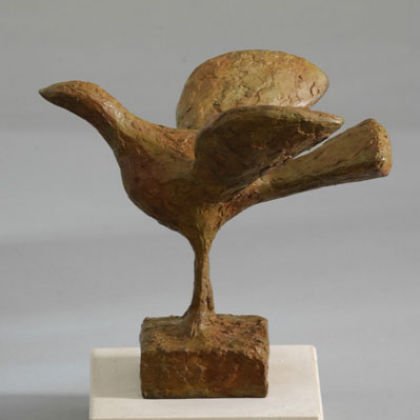 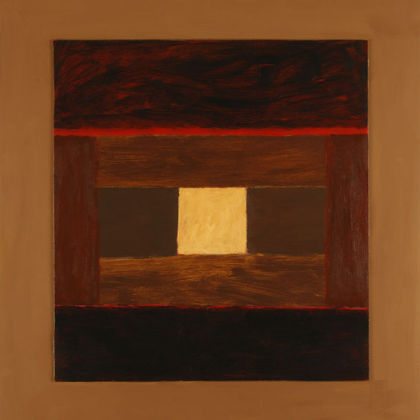 ‘To paint is to wait and watch, to try and listen to the picture, to chance a stroke, to hope for the best.’ Breon’s analogy between the fisherman and the artist suggests the quiet assurance, intuition and optimism with which he works. Breon celebrated his eightieth birthday in April and it is astonishing to see how he continues to work at such a pitch, and to both surprise and delight. In the ten years since he gave up making jewellery, Breon has devoted himself to painting, sculpture and printmaking, each discipline enriching the others. A theme – the nude or the bird, for example – introduced in one reappears and is adapted to another medium.

Breon’s archetypal birds owe an amused and open debt to the birds in Braque’s paintings. Birds in flight are ideal companions in the spatial explorations that have preoccupied them both. Breon has learnt from Braque’s tactile space – the way in which the space around an object becomes as palpable as the object itself. The dark backgrounds of many of Breon’s new paintings contribute intense luminosity and depth. Their surfaces are sensuous. Breon’s colours have a special richness and harmony, with many different browns, ochres, rusts, reds and greys in particular. Bright accents accompany the more muted and subtle earth colours – including some surprising pinks.

Breon has a wonderful eye for composition. There is a perfectly judged equilibrium about his works. The careful framing of compositions is characteristic; alternatively, he likes to crop compositions, as for example in Corners and Seated Nude in the exhibition. Breon favours simple, often geometric, forms and writes: “the more simply you can say something, the better.” Pattern in nature interests him deeply and is mirrored in his work. The landscape of West Penwith where he has lived for fifty years has entered his work at a profound level: it’s the close observation of nature that inspires him. Today he prefers a studio with no view, leaving behind the beauty of his walled garden, orchard and the distant sea. In Porthmeor Sunset, also shown here, Breon draws on memories of the studio he had overlooking Porthmeor Beach in St Ives in the 1960s and ’70s. It’s a reminder of his close association with St Ives and its rich tradition of abstraction.

Breon devours books on art of many kinds and is unashamed in his appropriations and debts. Primitive art is very important to him, as is especially evident in his sculptures. “Ever backwards”, he declares. In recent years he has come to feel himself “an old Celt”, at one with that remarkable artistic tradition. At the same time, his visual language is fundamentally a late or post-Cubist one. The poetic simplicity of his images, their imaginative boldness and sincerity, make this late flourishing in his work a particularly vital and distinctive one.

Christopher Reid, The Pursuit of Harmonies, CRAFTS, No 80, May/June 1986

Christopher Reid, Something in the Air, CRAFTS, March/April 1985