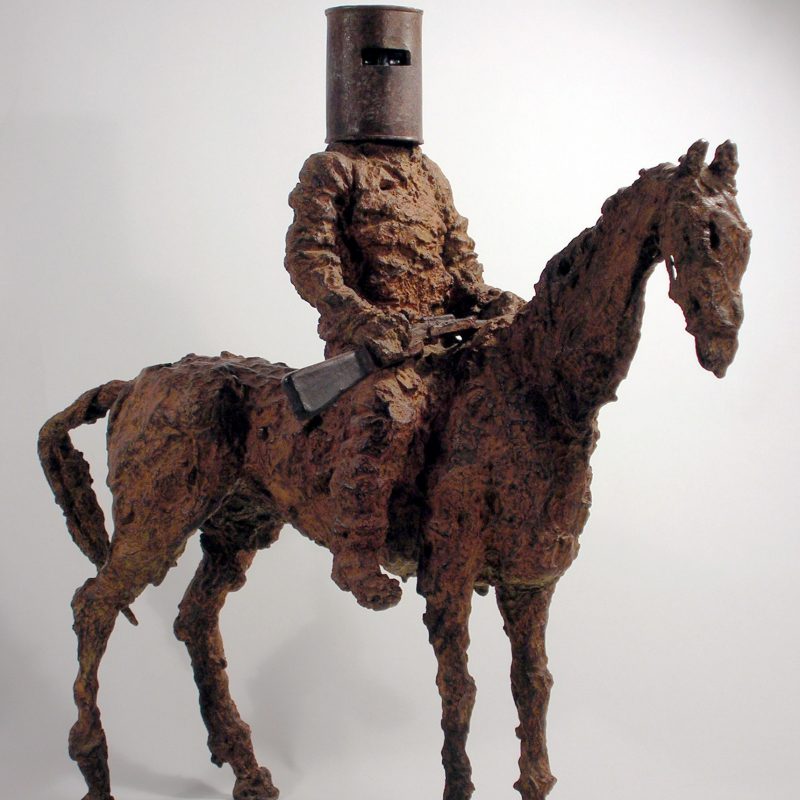 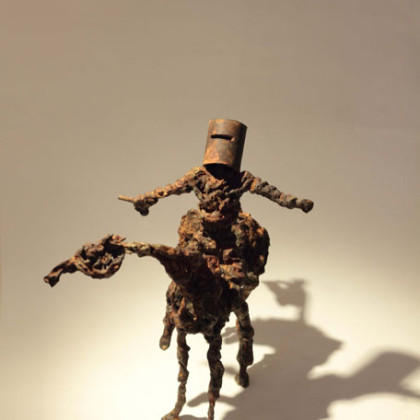 Deborah van der Beek’s sculpture depicting horses, riders, ancient warrior queens, bulls and other mythic or legendary subjects stands out for its compelling mixture of potent thematic content and brisk, expressive handling of form. Modelled in clay, wax or plaster, van der Beek’s bronze or ciment fondu pieces have an intense, Giacometti-like cragginess that requires expert foundry casting. The intricate surfaces, open to space and light, that seem to invade or erode solid form, tell the story of their making while providing a suitably rough membrane in keeping with such emotionally tactile subjects as Ned Kelly, Amazon queens, Salome and other archetypal or legendary figures.

The series of half a dozen or so Ned Kelly bronzes, trading as they do in a popular and romantic nineteenth century story of anarchy, defiance and victimisation, are likely to provide instant recognition to van der Beek’s growing, if recent, ambitions as a contemporary sculptor. The helmeted Australian outlaw and horse-thief sits proudly – indeed arrogantly – on a horse, itself a universal and powerful cultural symbol. The image has a sinister and absorbing beauty and fulfils the artist’s essentially left-wing identification with, and interest in, antique or more recent stories about the human condition and where we currently are as social animals. Inspired by Peter Carey’s Booker Prize-winning book True history of the Kelly gang, van der Beek interprets the classic Mariniesque or Frinkian theme of the horseman in terms of a legend popularised in the 1969 Kelly film starring Mick Jagger, which she saw in 1970 as an art student in London.

Van der Beek’s journey as an artist is both seasoned and novel: seasoned in that during art student days, first in London and Cambridge, then in Cardiff in the early 1970s, she complemented what would be a lifelong compulsion to draw in the liferoom with an urge to make solid form. She made sculptural ceramics, for instance a teaset parodying the baroque excesses of Sèvres and Meissen, encrusted with gilded cherubs, animals and small figures, prefiguring her sculptural intentions. During the next 25 years or so van der Beek used her drawing skills illustrating (and latterly, also writing) children’s books. Her recent career as a fully-fledged sculptor is therefore novel, coming to fruition only in the late 1990s when she started attending life sculpture classes taught by Sue Larner at Widcombe Studios in Bath.

-An Introduction by Peter Davies