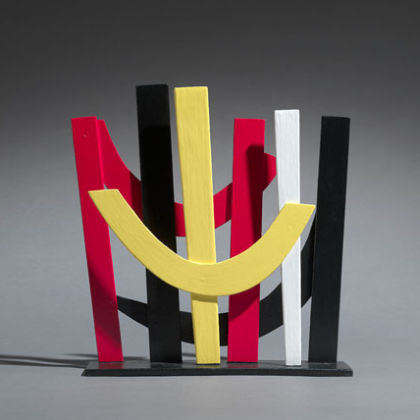 1930 After attending local schools, begins work, first in a cycle shop, then at a radio factory, bakery, aircraft factory and electrical component wholesaler in Birmingham

1941-45 Transfers to the Commandos, serves in the Middle East and is taken prisoner in Crete. POW until April 1945, during which time he meets Adrian Heath who gives him drawing lessons and encourages him to paint. His first solo exhibition is held in his home town, but in his absence

1945 After his release, marries Kathleen Clarke in August and returns to wholesaling work in Birmingham, while attending art classes in the evening

1946 Following an illness, resigns his job and moves to Cornwall at Heath’s suggestion, to study at Leonard Fuller’s St Ives School of Painting. Becomes friends with Peter Lanyon, Sven Berlin and also Leonard Richmond, who teaches him to paint landscapes in oil ‘that might sell’

1947 Meets Ben Nicholson, with whom he corresponds. In the autumn starts his studies at the Camberwell School of Arts and Crafts, taught by Coldstream, Pasmore and Kenneth Martin, inter alios.

1948 Introduces Pasmore to Ben Nicholson. Returns each summer to St Ives to work at the Sunset Bar, and to paint and exhibit with the St Ives Society of Artists. Begins to experiment with abstraction

1950 Returns to live in St Ives, taking a studio next to Ben Nicholson and working part-time for, and occasionally exhibiting with, Lanyon at Robin Nances’s, the furniture-maker

1951 Starts to work as an assistant to Barbara Hepworth (together with John Wells and Denis Mitchell) while studying for his ‘Intermediate’ at Penzance School of Art. Meets Roger Hilton. Elected a member of the Penwith Society. E.C. (Peter) Gregory buys his important oil painting ‘Walk along the quay’ (now Coll. Adrian Heath, on loan to Sheffield City Art Galleries). Meets Sam Francis for the first time, then exhibits at the ICA in London

1952 Begins to teach life drawing at Bath Academy of Art at Corsham, while also teaching anatomy and still-life drawing part-time at Willesden School of Art, London. Stays with Adrian Heath in London during term-time

1953 E.C. Gregory purchases the artist’s ‘Blue movement’ (1952) for the CAS (illustrated in its Annual Report for 1952-53), and the British Council makes its first purchase (a watercolour) from the artist

1954 E.C. Gregory offers Frost the two-year Fellowship in Painting which he was funding at Leeds University. Returns to St Ives for the summers while at Leeds

1955 Teaches part-time on Harry Thubron’s Basic Design Course at Leeds School of Art. First visit to Paris, accompanied by Roger Hilton, who also takes him to visit Sam Francis and Soulages in their studios, and to Noguchi’s sculpture garden for UNESCO

1956 Returns to live and paint full-time in St Ives. Shortly thereafter becomes acquainted with the American critic Clement Greenberg, and later with the dealer Martha Jackson and with Mark Rothko, who all visit St Ives towards the end of the decade

1959 The Tate Gallery purchases its first painting by the artist, from E.C. Gregory’s collection. (It has since purchased more paintings, notably in the 1970s)

1964 Visiting Lecturer in Fine Art at Reading University. Summer teaching at San José,California, in the autumn takes up a Fellowship in Painting at Newcastle University

1969 Awarded a Prize at the Arts Council of NI Open Painting exhibition, Belfast

1970 Promoted to Reader in Fine Art at Reading University

1973 Member of the Selection Jury for the First British International Drawing Biennale, organised by Teesside BC at Middleborough

1974 Moves to live and work in Newlyn, Cornwall

1976 Summer teaching at the University of Western Ontario, Canada

1981 Retires from Reading University, and made Professor Emeritus. Visits Russia for the first time to see the early work of Kandinsky and Matisse

1986 University of Reading and Newlyn Art Gallery, and tour to Plymouth.

2009 A Select Exhibition from the Arts Council Collection, York Art Gallery, then touring